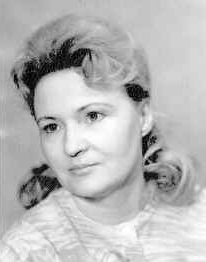 A time to cast away stones,
and a time to gather stones together.
(Ecc. 3: 5)

I am a leader of a group attended to the genetics of domestic fowl at the Laboratory of Animal Comparative Genetics.

The problem of the origin, distribution and evolution of domestic fowl is the main interest in our investigations during last two years.

The time has come to gather stones together. That's why we began to search material for the computer data bank of the ancient evidences (archaeological, ethnographical, etymological, ethnological, from ancient literature, art, religions and so on) of the domestic fowl origin and distribution. It consists now of about 150 points.

Everybody is invited to take part in the enlargement of this data bank. All together we shall build the mountain of scientific truths with the scattered facts and ideas.

At the end of this note I'll cite the words said by famous Russian chemist D. I. Mendeleyev:

«The time will come when all the world is comprehended in one science, one truth, one industry, one fraternity and one friendship with nature....This is my belief. It moves me ahead. It makes me strong. It is worth living for this achievements.» 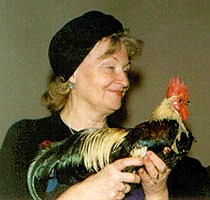 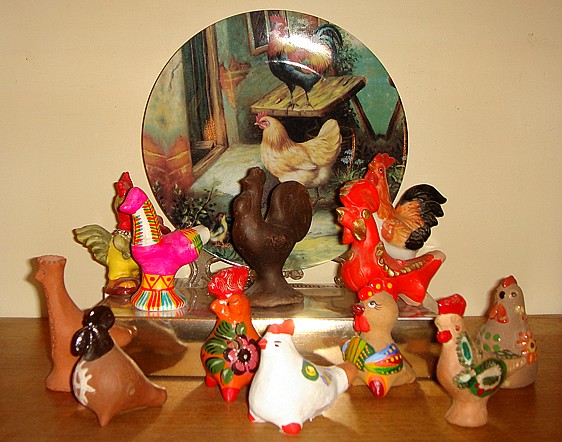 They are whistles from my collection.
They possess a magic meaning: they help persons
to avoid misfortunes by their whistle. 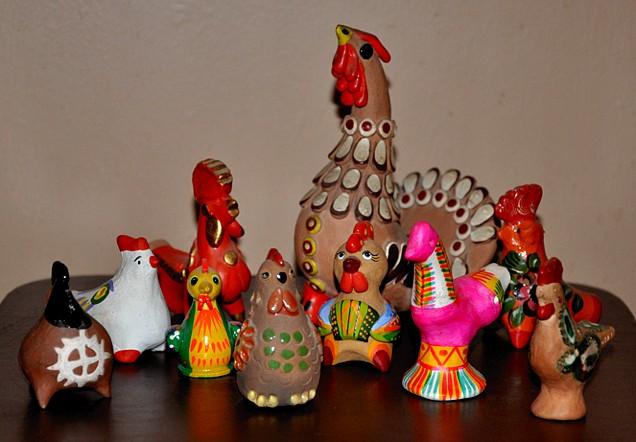 The brown cockerel at the left has white circle on the breast.
It is the symbol of the sun in the time of paganism.

December 2012 - About two decades ago Irina Moiseyeva read “The last Roman, Boethius” written by V.I. Ukolova in Russian. The book tells the tragic story of Boethius, an outstanding philosopher, scientist, poet and encyclopedist. Then she came to be acquainted with the last book by Boethius “Consolation of  Philosophy - De consolatione philosophiae” that he wrote in jail before being executed. Both books led her to the idea of writing a letter to Boethius to discuss eternal questions that have always troubled humans.

I think that nobody doesn't guess to write letter to you, so you don't know many events that passed after your death and the extent of the significance of your teaching for the mankind.

Urmantzev (philosopher, who was working out The general theory of systems in Russia, the country that didn't exist at the period of your life) confirms that no new discoveries are in your studies after Socrates, Plato, Aristotle and other ancient philosophers. Some scientists have the same opinion. Urmantzev divides all people into two categories: creators of new theories and noncreators of new theories. He leaves out of account the last group of people. I can't agree with him. As this concept concerns to you I'll try to explain my position. The existence of the civilization depends on different human activities: creation of theories, teaching, treatment, art, building, making clothes and etc. They are of equal importance for the whole civilization in spite of creatable in any level or no creatable characters of the professions. Of course some fields of people's works may be leading in the various period of the development of the mankind, in different countries and circumstances. For example, if earthquake happens physicians and savers became of the most important professions, but not the creators of new theories!  However the creators are more valuable for eternity!

The same situation in general is for an individual of the human society. It has three essences: Homo sapiens, Homo social and Homo biological. An individual needs in the presence of all three essences to be developed in harmony. What do you mean is Dr. Elio Corti from Valenza fanatic of fowl? Is he a jailbird? He trust to the bird to resolve his own problems: to smoke or not to smoke and refused of smoking when the bird Gracula religiosa

throw out all his cigarettes! Every fanatic deprives himself of some part of essences.

The main subject of this letter is Homo sapiens. It is needed to be Homo sapiens four elements: first and second stages of cognition, the object to which the cognition is directed and the result of cognition of this object. It is named comprehension. I substitute first and second stages of the cognition for Spirit (human mind, logos, intellect or ratio) and for Soul (anima), though I understand that they are not exhausted by the first and the second stage of cognition. I choose the word Spirit and Soul because they are nice and I like them. Primum it must be done the definition of Spirit and Soul. ("Soul" in Russian is "she", " Spirit is "he" as in Italian). Spirit is the ability of understanding and comprehension of the world. To give the definition of Soul is very difficult task, because I have not found right definitions of Soul in my opinion. It seems that the essential sense escaped out of all definitions. Do you know the essential sense of Soul?

Spirit and Soul are included in the system of comprehension of the world. In spite of their community they have so distinct affinities! I think Spirit is tall as a column or a tree and may going out of body. Soul is small, round and has enough room in a human body and never leaves it during a human life. But nevertheless people can loose their Soul sometimes. For what shall it profit a man, if he shall gain the whole world, and lose his own soul?  People may use Spirit of another person. Everybody possesses only own Soul and doesn't able to borrow it from others. Spirit of different humans resembles to each other in some cases. Soul is unique. She takes part in love. When Spirit meddles in love the last disappears! The characters of Spirit are almost, clear for science, since people construct the artificial mind with success. Nobody try to create Soul! One's Spirit, is immortal for the mankind life. Soul perishes with the death of a human body. Sometimes she is able  to leave the memory of her existence. No more! Spirit has great power. Soul is delicate, unprotected and can be destroyed after uncareful treatment.

You place Spirit on the highest top in the system of these two parts. (Consolation: book V, V). I have a great respect to Spirit myself (I send you a small verse on this theme). But the truth is better. So let us continue to discuss. The kind of relation between Spirit and Soul is accomplished in four main ways: in helping each other, in subordination each other, in antagonism and in "empty" relations (absence of relations). The types of relations depends on the intellectual maturity of human, period of his life, nationality, customs, outer circumstances and many other causes. Spirit and Soul are not constant. They change and develop during human’s life. Child Spirit and Soul are not equal to themself in adult people.

Soul dominates on Spirit in the case of subordination very often. In your verse about Orpheus and Eurydice Soul didn't subordinate to Spirit (Consolation: book III, verse XII). She may have this right, though I understand very well from my own and the mankind experiences that Spirit sees by thousand eyes and Soul only by one. So she makes errors and when she isn't controlled by Spirit misfortunes happen often. But who can say when humans get the highest enjoyment being in the delusion or knowing the truth? Can you answer? You feel that to know everything for people is not very pleasant situation (Consolation: book III, VIII).

The best situation is when both Spirit and Soul are in an agreement, in helping to each other. Then the results of human Spirit activities (theories, discoveries, knowledges, concepts and so on) are transferred through human's Soul and become emotional coloured, impressive, alive. Without this process the theories are useful but dry, dead and dull. In her turn Soul is undergone the influence of Spirit. Afterwards she gets kind, gentle, beautiful and as a sensitive turning fork hears every tiny sounds! Vice versa, Soul is primitive and rough as brachycephalus has!

I suppose that your Spirit and Soul were in harmony in your life. The evidences are: your teaching, educational books are used for about 15 centuries. Your ideas were used in arts, literature, poems (Dante, Shakespeare, Moiseyeva and others ). I don’t know the example in art where the formula e = mc2 of Einstein was used! You rose the main questions for mankind (Spirit and Soul, Faith and Spirit, Fatum and Fortuna, Freedom of human's will, the goal of human's life and so on). Do you think that people after you resolved these problems? Oh, no! They do not know yet right answers and if they know they do not follow them. Your writings, verses undoubtedly have been transferred through your Soul because they impress and excite people so long! The people including me are forced to think by you! Your own life and tragic death influence on people in the positive way and became an example to be courage and stoic when one's life is not pleasant. You have shown the greatness of human Spirit over the individual misfortunes and afflictions which are so minor in comparison of all world bitterness and unfairness! The destiny of humans by you is: to live, to love, to think, to create, to make good deeds. This is your will to future generations.

I do not claim my letter is a philosophical essay. Somebody will find in it many mistakes concerning to logic, gnosiology and The general theory of systems. My task was only to understand my own position to some main questions of human life. I wanted to tell you about my negative consideration of differentiation of people into elite and non-elite. It is no matter for me who is included in elite: geniuses, tsars, presidents, rich men and etc. I try to analyse the complicate structure of Homo. I should like to defend my Soul against the domination of other Spirits, which seem to me  are not right. She may have her own ability to choose the way sometimes under the control of my own Spirit. I do not know how often. Let us leave some share of secret in the nature of Soul. Here I express my credo.

At the end. Please, Severino lift up your wise head over the computer and look at the Pole star. It is not a very bright star, but it shines alone in this area of the sky. This is the direction where I live. I am sure that you know the constellations very well (Consolation: book I, verse VI, book IV, verses V, VI). Your star is flying in the sky.  I do not know where.

I embrace you.
Heartily yours
Irina

To the memory of Boethius

As the light of very far star
reaches the earth not soon.
Thus the light, of the Boethius' great mind
we receive through surface and centuries
not at once.
Boethius says: "Oh, people, do not fuss about.
Treasure or poverty, glory  or  oblivion,
terrible ugliness or divine beautifulness
are  nothing.
They  disappear without any trace.
Only Highest Spirit may be out of death.
It builds the bridge to the Eternity for us".