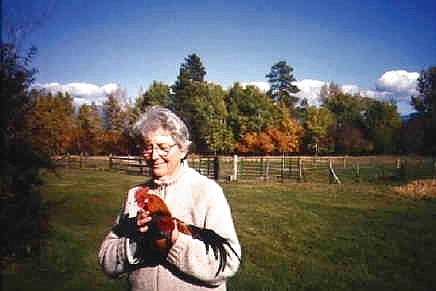 Old age can be truly GOLDEN, in spite of old age. A life time of interest in the earth and all that grows on and in it, has now, in my "later years" focused on the genetics of poultry, as expressed in the breeding of the Dutch Bantam in America, while urging all fellow breeders of this lovely bantam to adhere to the Standards of The Netherlands -- and not make a "new American" type of Dutch Bantam.

Early years were in Oregon, remarkable loving parents, small acreage with small pets and wonderful gardening, then horses, a major interest. But the world has so much of interest, Oregon State University provided a B. S. in General Science and the opportunity to study, Animal Husbandry, Genetics, but also, Botany, Geology, Paleontology, Climatology, Astronomy, Bacteriology, Literature, English, Russian, but alas, only a little of each - and enough to rest, not entirely hidden in the mind - awaiting the enfolding of a more usual life.

Work years, marriage, a wonderful farm in NW Montana in the Flathead Valley, surrounded by mountains, snowcovered in winter, green and forested and spaces for wild flowers (and wildlife). During this time we were devoted to our 3 daughters, who could share not only the work of a Dairy Farm, haying and harvest, but also hobbies of "Old Garden Roses", Siamese cats, Pembroke Welsh Corgi Dogs. (Walt Disney used one of my Corgies in herding scenes in a film: "Little Dog Lost", just now revived on TV), and always horses, Welsh ponies when the girls were small, and now Welsh Cobs.

Wild birds are so much in evidence on the farm property, one could only begin to keep records, which led to Audubon Society study skin collection, and 15 years of lecturing on the "Importance of Birds" at schools and clubs. 137 species have been identified on my farm -- some are migrants seen only once or twice in the 48 years I have lived here.

The Dutch Bantams were discovered (always kept poultry, as did my parents) in 1983, and it was 3 years before I could locate any. They quickly became the only breed I wished to keep. Astounded at the variety-breeding requirements, study became necessary, and trips to The Netherlands to see first hand (language problems -- so I am still slowly learning the breed!) and how glamorous the birds are in Holland compared to in the US.

Now, with children married and gone from home, widowed, maintaining a second farm of landscape trees, the Dutch Bantam is my major project, opening a whole new life of friends and study and great joy. Met Dr Corti in Switzerland and have been greatly pleased to help, in a very small way, to be a part of this "monumental", important work. Aches, pains, sadness and loneliness of old age disappear -- and truly life is GOLDEN!