Aldrovandi and the egg 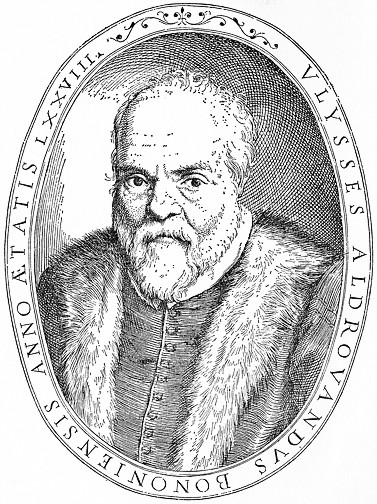 It is not easy to summarise the long existence of a genius with a restless mind such as Ulisse Aldrovandi because one runs the risk of unwillingly neglecting important events. We will try to underline those which best express the historical moment he lived in, characterised by innovations leading to an overhaul of the concepts that guided scientific knowledge for too many centuries.

Ulisse was born in Bologna on September 11th 1522, his father died six years later and, already then, the boy showed his lively intelligence and willingness to learn. When he was 12 years old, without a penny in his pocket and without telling his mother, he set off for the first time and went to Rome where he became a page boy for the Bishop of Sardinia; he soon tired of this position and went back to Bologna where he studied Arithmetic under the guidance of Annibale della Neve.

He took advantage of this teaching and, when he was 14 years old, he went to Brescia to work as an accountant for a rich merchant. He then returned to Bologna, and once again without telling anybody, he left for Rome for the second time.

On the journey back he stopped in Loreto, where he met a pilgrim who convinced him to follow him to Santiago de Compostela

. Ulisse, restless as always, did not need much encouragement: he didn’t go back to Bologna and after an adventurous journey, during which he was attacked by thieves and murderers on the Pyrenees, he reached the important Spanish religious site.

On the way back from Galicia, in Genoa, instead of crossing the Apennines to go to see his mother, he decided to continue his pilgrimage directly to Jerusalem. He finally went back to Bologna where he studied humanistic subjects, logic and law, the subject of his master degree.

From 1548 to 1549 he studied Mathematics and Medicine in Padua. In 1549 he was accused of being a heretic, together with seven other scholars from Bologna (his lively mind caused him to face the same accusation in 1571). Having gone back to Bologna, in 1553 he got a degree in Philosophy and Medicine, but he never practised the medical art as the governors of his city would have wished. He preferred philosophy and, thanks to this activity,, he soon became very popular among university students by giving private lessons in logic. For 33 years he taught Natural Science disciplines in public institutions, but his actual teaching career lasted 43 years. He died in Bologna on May 4th 1605.

Aldrovandi has been the founder of the Natural History faculty at Bologna University, over the centuries this was then divided into three areas: Zoology, Geology and Mineralogy.

The post of Zoology professor was given, in 1906, to Alessandro Ghigi, who until then had been the only one among his successors to be interested in poultry. Ghigi, who taught until 1950, also had the great merit of having greatly encouraged the collection of the whole of Aldrovandi’s objects. Over the years these had been distributed to the various museums related to the departments into which the Natural History faculty had been divided. Today in the University Library of Bologna we find all the remains and manuscripts of Aldrovandi’s works.

Aldrovandi was always very interested in chicken eggs, from their formation in the ovary to the hatching of the chick. In the second volume of his Ornithologia published in Bologna in 1600 we find traces of everything that had been said in the past, as well guidelines for future research. The traces of the past could not but be take into consideration by Aldrovandi, because his intention was to go beyond platitudes which could be destroyed only through objective observation. At the same time he paved the way for the founder of microscopic anatomy, another contemporary scholar from Bologna: Marcello Malpighi

The latter, thanks to the microscope which Aldrovandi could not yet avail himself of, described the chicken embryo in detail from the sixth incubation hour, whereas Aldrovandi had to start from 24 hours.

To clear all doubts, Aldrovandi dissected some hens and he demonstrated exactly where the egg came from, the position of the ovary, the direction of the oviduct, but he could not avoid the superstitions of the past when he stated, like Aristotle, that before being laid the eggshell is soft. It becomes hard when it comes in contact with the air in order not to hurt the hen while she is laying it.

He talked about uterine diapedesis to explain the blood specks found on some eggs, but he did not talk about the possibility of micro or macro lacerations of the cloacal orifice as causes of blood staining: in this sense he was consistent, because a soft body like an egg before it is laid would not be able to cause lacerations.

The question we have all asked ourselves and which those who want to make jokes about the poultry world keep asking us is: which came first the chicken or the egg?

Aldrovandi, who was interested in philosophy, had to give an answer: according to the Scriptures, it was the chicken that came first because animals were created at the same time as the world; therefore the chicken does not come from the egg but from nothing.

Aldrovandi dealt with a number of platitudes which, in his opinion, had to be clarified and explained once and for all. One of these is the statement according to which a broody hen should be given an odd number of eggs to hatch. Aldrovandi’s conclusion is that this is only a tribute to Pythagoras, who thought that odd numbers were the summum bonum.

Aldrovandi said that, if you just went and asked farmers’ women, he would be proved right. We, in the XX century, even before the use of ultrasound scans, still thought that if the abdomen of a pregnant woman was pointed this meant she would give birth to a male, whereas if the abdomen was rounded it would be a female. Fortunately these theories are no longer held to be valid, as is the forecasting of a chick’s sex from the shape of the egg. Indeed its shape is typical of each hen and of traits within the breed; these traits are very easily inherited not only from the mother but also from the father of the hen, which according to Aldrovandi, could give birth only to males or only to females.

The origin of Aldrovandi’s statement concerning the 50 or more daily couplings of the cock is still unknown, but this image of the cock as a sex athlete is still present in a summary of the Histoire Naturelle by Buffon

of 1822, where we read that: “The cock is a lustful animal, and he copulates with the hen in the open air up to fifty times a day”.

Fifty times divided by 10 females, means 5 daily couplings for each hen. Today we have more realistic data available, according to which a sexually active cock copulates 20-30 times a day and not all couplings end with ejaculation.

Aldrovandi had to surrender to the evidence and authority of those who had given him cock’s eggs. These were round yellowish eggs and one of these eggs had broken to reveal an almost completely white content with something yellowish in the middle. Aldrovandi was reluctant to admit that a cock could lay eggs, maybe because he knew that in 1474 in Basle — a name derived from Basilisk, a fantastic and terrible animal, symbol of sin — a cock had been condemned to death and burnt alive because had gone against natural laws and laid an egg. But Aldrovandi was eager to get rid of these cultural and religious superstitions which were still widespread in his time, and therefore he also gives the age of laying cocks: these were mostly individuals aged 7, 9 or 14 years at most.

Today we can support Aldrovandi’s theories in the sense that the egg which broke, considering its content, probably came from an old hen subject to almost complete ovarian atrophy and had turned into a cock, because the rudimentary right gonad had become a testicle. In the egg subsequently laid the yolk was reduced to a minimum and surrounded by abundant albumen.

The dangerous theory about the laying cock is closely linked with that of the Basilisk. It was a wide-spread belief throughout Europe that these eggs produced the frightening multi-faceted animal, the Basilisk

, especially if these eggs had been hatched by a toad. Aldrovandi is not sure about the Basilisk, but he talks about it very often. He did not even realise that a Basilisk had been presented to him as a monstrous cock which he wisely classified not among foreign cocks but among monsters. Today we know that the common Basilisk Basiliscus basiliscus is that iguana that, like other similar species, lives in Central America and can run on the water at a speed of up to 12 km an hour. 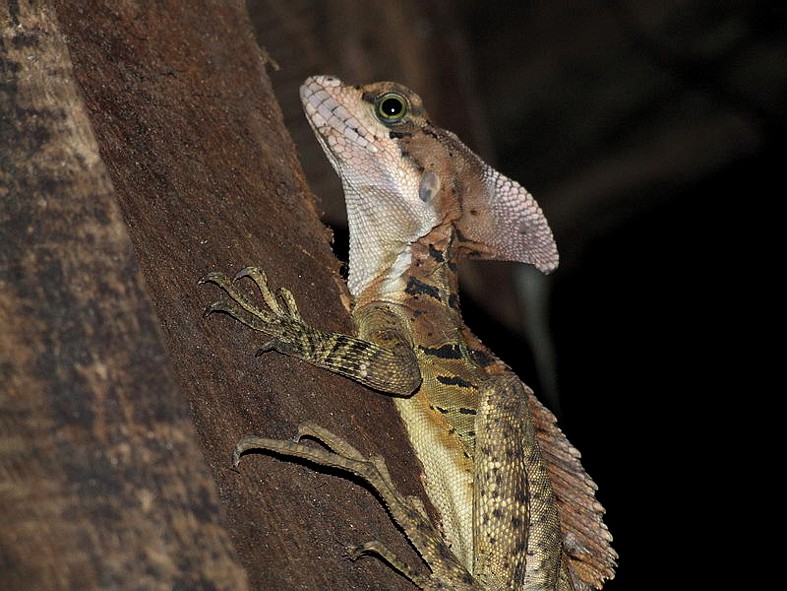 It is not worthwhile to search for something about the colour of XVI century chicken eggshells in Aldrovandi’s texts, as in those of his contemporary Gesner. On the basis of ancient texts they both took it for granted that the shell was white. An indirect confirmation of the fact that the eggshell was supposed to be white is provided by Aldrovandi when he advised a breeder on how to protect the eggs from the voracity of some hens. Since the hen is more inclined to lay if she sees something like an egg in the nest, it is worthwhile placing something egg-shaped, made of marble or some white-coloured stone there.

Only his contemporary Girolamo Fabrizi d’Acquapendente informs us with certainty that, at least in the Po valley, the eggshell was white. The brown eggshell was probably introduced into Europe, or in most of Europe, only from the XIX century onwards. This theory should be taken with a pinch of salt because the history of the Marans, which does not belong to the Mediterranean Basin but rather to the Atlantic Coast, leads us to suppose that the porphyrine genes arrived during the reign of Henry II of England (1133-1189) and over the next two centuries.

or Marcello Malpighi something in the field of embryology, but none of the texts consulted proves this. As a matter of fact Aldrovandi published the second volume of Ornithologia in 1600; here he described in great detail the genesis of the embryo starting from the first 24 hours after the beginning of incubation. In my opinion, the studies done by Aldrovandi on the embryo led to two main results, even though he could not avail himself of the use of the microscope:

— He states that, unlike what Aristotle thought, a pre-requisite for generation is the speck similar to a frozen drop of water which is found attached to the yolk and corresponds to our blastoderm. Indeed all the eggs that do not have this are infertile.

— He described the various components of the eye, unlike Aristotle and Albertus Magnus: the sclera, the crystalline and the vitreous body.

It is no use asking ourselves what Aldrovandi would have described if he could have used the microscope. Like the rest of us, he had to do with what his time offered and therefore did the most of a bad thing with an ability which is still an example for scientists today.