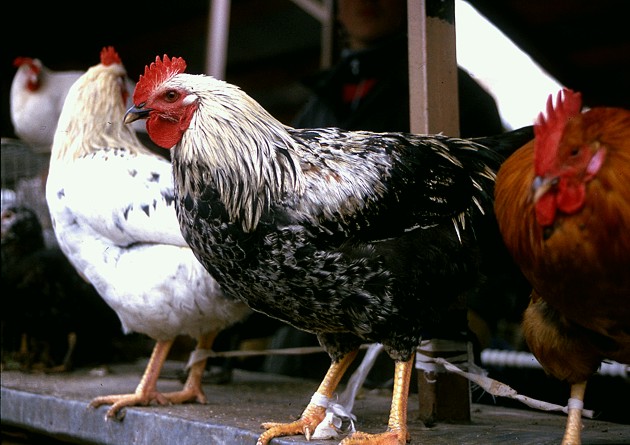 Russia and Ukraine are famous for specific native poultry breeds. One of them is Yurlovskaya golosistaya, or Yurlov Crower.

There is a lack of exact information on this breed in the foreign literature. Two German writers, Rüdiger Wandelt and Wolfgang Vits, published their papers on Yurlov Crower, and here some comments of mine to those papers are.

For the first time I have faced the data that the Yurlov Crower chickens have been known for 300 years.

(1992), in her most comprehensive review on old Russian breeds "Farm Animal Genetic Resources: Rare and Endangered Native Breeds", said that the exact time of breed creation is of vague idea, about 100 or more years. Regarding the place of creation she referred to different opinions out of which a preferable version is seemed to be a village Yurlovo in Orel Province.

For me it is interesting to learn that in the Moslem part of Bosnia there is a long crowing breed, Bosnian Crower, too, that was reported as far back as post World War II period. Concerning the Yurlov Crowers again, they were able to crow as long as 25 seconds, as Mrs Moiseyeva (1992) quoted Prof. Penionzhkevich (1939).

Let me now return to the article by R. Wandelt. The author referred to a publication by S.K. Trusov in Russian magazine 'Priusadebnoye khozyaistvo' (Hofwirtschaft  in German, Backyard in English), No. 1, 1986, in which one seems to be able to read that the Yurlov Crower breed ostensibly originated from village Drowoseschni while its today's name descends from a locality Yurlovo or the Yurlov high road lead to Moscow where these chickens were mostly bred.

I have found the Russian original of that paper:

and discovered some inaccuracies in German text with regard to descent of the Yurlovo chickens. Trusov notes that there are many versions concerning the subject. Since the etymology of breed name is exactly unknown, Mr. Trusov proposes one more version.

First, an about 300-year history of this breed mentioned by R. Wandelt is a casual mistake. It is a matter of a peasant kin of the Vorontsovs known in village Drovosechnoye (Drowossetschnoje in German), Orel Region for more than 300 years. The author visited the Vorontsovs who are famous in the neighbourhood for breeding the Yurlov Crowers. Fyodor O. Vorontsov, a retired school director, and his son Oleg, chief agronomist of the local state farm, told that their great-grandfathers and grandfathers acquired a passion for feathered singers so that the hobby is inherited. But it does not mean that the Yurlov Crowers have been bred at this location for more than three centuries. I can only suggest that their origin appears to go back to the mid 19th century.

Second, R. Wandelt does not correctly conveyed the explanation of breed name origin. There is a village Yurievka (Jurjewka in German) in the neighbourhood of Drovosechnoye. Behind it a high road passed before. Merchants purchased cattle of local peasants and drove it on that high road to Moscow. Along the high road smithies, wind mills, inns and pubs were situated. The Yurlov chickens were just bred by blacksmiths, millers, inn holders and peasants of adjacent villages. So it is possible that the name "Yurlov" (Jurlow) came of the village name, probably due to phonetic transformation of a Russian adjective 'Yurievsky' (Jurjewskij), derived from Yurievka, to another adjective 'Yurlovsky' (Jurlowskij). In any case old residents are sure that a region close to the high road behind Yurievka is the true homeland of the Yurlov Crowers.

Third, the Yurlov cocks differ in voice from other breeds. We are accustomed to hearing 'ku-ka-re-ku-u...' ('cock-a-doodle-doo...' in English). The Yurlovs subdivided into basses, baritones and tenors distinguish themselves in diverse manners, 'gu-gu-gu-gu-u-u' in basses, 'ku-gu-gu-gu-u' in baritones and 'ku-ku-gu-gu-u-u...' in tenors.

The address of Trusov, a poultry fancier, was given in the magazine:
Mr Serghei K. Trusov
Apt. 53, 30"a" Sacco i Vanzetti Street
Kaliningrad, Moscow Region 141070, Russia

Later, in the correspondence with Dr. Irina Moiseyeva, she informed me the following:

"Yurlov Crower. My knowledge of the origin of Yurlov based on the literature data (Farm Animal Genetic Resources..., p. 102). Authors consider that Yurlovs have blood of Chinese meat type breeds, game breeds and local populations. What game breeds nobody said. I consulted with Blistanov. He said that Malays didn't take part in the origin of Yurlovs. It is difficult to check this information. But Yurlovs undoubtedly has blood of game and meat type of breeds".

I have one more information on this breed that was received from Dr. Irina Moiseyeva:

During the exhibition of the Emperor Russian Society of Rural Poultry held in the Poultry Museum from 13th to 17th November last year, a 'competition of cock crowing' was arranged with regard to acquainting with methods having taken place amidst the poultry breeders of the central provinces. Among the cocks competed in crowing, so called 'Yurlov Crowers' were present which I brought from Yelets, Orel Province. From appearance if rather solid, those cocks were complicated half-breed bred by peasants of Yelets and Livny districts.

According to tales of old residents, the Yurlov Crower cocks emerged for the first time at that locality more than 50 years ago. Their origin is attributed to an unknown soldier who carried eggs of some large chickens from a distant country after his finishing service. The breed name originated from the Yurlov Fair held on 21st May in village of Izmalkovo where these chickens chiefly brought for sale.

Prevailing plumage of cocks resembles that of the Dark Brahma with the silver straw hackle, bare or slightly feathered legs, single and rose comb. Hens are dark, too, have small white spots scattered all over plumage and lay very many large eggs. Those parts of Yelets and Livny districts where the Crowers are bred have been long considered by egg exporters as the best for large egg produce.

It is interesting that these chickens have been breeding till now without any crossings with other cultural breeds but the cocks with strong voices are culled for breeder stock.

We do not know if there is some relationship between voice and health in the man but in the cocks it exists indisputably. Thanks to selecting the cocks with strong voice and therefore good health, peasants preserved the birds with large size of body and eggs. And it is known that the Yelets eggs take first place because of their large size. A common peasant cock weighs usually up to 5 lb. but in the villages of above locality one can often face specimens with body weight 9 to 12 lb. and almost all cocks weigh 7 to 8 lb.

At the 6th Poultry Exhibition in Yelets on 29th September this year a family of Yurlov Crowers was presented the cock weighing 11.75 lb. and two hens 8.75 and 8.24 lb., respectively.

Cock crowing is simply measured with 'quarters' by peasant fanciers who have no stop-watch. When arranging the competition inside village house, a Yurlov cock is given grain strewn over the earthen floor. After having eaten, the cock is walking around with the proudly elated breast. His movements are attentively watched by the crower fanciers sitting on the banks along the wall. One of them slaps by hand on the knee, shields the mouth with the palm and begins imitating a faint cock crowing. Suddenly the cock becomes alerted, throws back his head and starts singing his cock-a-doodledoo... As if at a command, peasants begin measuring 'quarters' with the straightened palm on the table edge or on a stick, which is specially held in hands. Each quarter is approximately equal to a second.

The author used to listen to a cock crowing as long as 15 seconds. The most valuable is so called 'oaten' crowing, rough, smooth, hoarsenessless, with the second and consequent songs being similar in length. A fattened cock has a specific, 'fatty' shade with a hoarse tinge. Quite often a good crowing cock is bartered for a ram or a heifer. Nevertheless, the interest to this native Russian sporting is declining on and on. Therefore the Chairman of the Emperor Russian Society of Rural Poultry Mr. V.P. Goncharov marked on 14th November last year the beginning of renewing crowers' competitions.